[I received a review copy of this book in return for an unbiased review.]

Listen to me, all authors in the future. Covers are incredibly important. You would think that people would listen to the whole “Don’t judge a book by its cover” adage, but we don’t. Maybe we don’t form all our future opinions on the cover design, but humans are fallible and we’re weak, so initial impressions are impacted by how cool or unique a cover looks. So when I was scrolling through my feed and saw that there was a book that had a red-headed, bespectacled man riding the dragon from The Neverending Story with the biggest grin on his face, I knew I had to read it.

I mean, look at this cover: 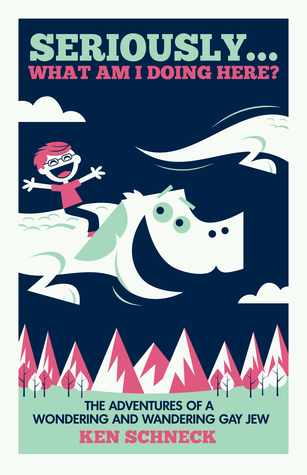 How could you resist?

As always, please note that some of the links below are affiliate links. If you’re interested in buying the books, please consider clicking on them! They help keep the lights on.

I love armchair exploring and adventuring. There are plenty of real life adventures I’d like to go on, but those would end up with me suffering from some broken bones or dying of dehydration in a desert somewhere. So when Seriously… What Am I Doing Here‘s brilliant cover was followed by the words “ESCAPISM TO ADVENTURE (FOR NON-ADVENTURERS)” I was 100% sold on the novel. Then my typical wariness came back once I saw the second tagline: “The Adventures of a Wondering and Wandering Gay Jew”.

It seemed so 90s to me that I was worried that Ken Schneck’s portrayal of himself and his adventures would have as much depth as any character from a 90s sitcom. I shouldn’t have worried. From our uneasy beginnings, I feel like Schneck have been able to go on a journey together with him doing all the hard work. He has a clever and nuanced perspective on his journeys, unafraid of pointing out his own shortcomings rather than using this as an opportunity to fluff up his ego. From doing charity work in Uganda to trying to find himself in the mountains of Colorado, Schneck has lived some incredible experiences.

He writes well, but there are little distractions that kept creeping into my thoughts as I read. At first, I just noticed the repetition of the word “whopping”. It only happened three times or so, but it was used enough that I would be jarred out of the narrative each time. I thought that it was just an expression that Schneck liked and it was used less as the book progressed, but by that time I was already looking out for repetitive patterns. There are quite a few jokes that follow the rule of three in this novel that had me rolling my eyes by the end of it.

Schneck talks about the three major players in his personality: the Entertainer, the Intellectual, and the Perfectionist. It was the Entertainer that was the most draining for me.

Don’t get me wrong, Schneck is funny and when he lets himself write for no particular audience, the jokes tend to land. Beyond that, there’s a warmth and a thoughtfulness to the way that he writes which makes the snarky jokes all the more jarring when they show up. Sometimes during the reading, I could forget that I wasn’t reading the newest A.J. Jacobs book and immerse myself in the experiences. Other times, I was forcefully reminded of Schneck’s inner Entertainer and I wanted to reach through the book to shake that part of him. “It’s fine,” I would say, “we already like you.”

And let’s not even start in on how the Kindle version of the novel I received had such poor formatting that at times, I felt like I was reading bad poetry.

But before you walk away thinking that I didn’t like the book, let me be absolutely clear that I did.

Seriously… What Am I Doing Here? was a fun read for me and one I zipped through in a day or two. I loved hearing about these different experiences that I would never get the chance to try and Schneck is a witty narrator who isn’t afraid to take himself down a few pegs when needed. I selfishly hope that he continues to have these amazing experiences so I get the chance to read them.

2 thoughts on “Seriously, What Am I Doing Here? by Ken Schneck – Review”